It was on my crystal lettuce I bought from an organic farm that I found this tiny snail curled up in between the leaves. Mistaken it as a speck of soil, I washed it off my lettuce and to my surprise, it’s a snail that had survived days of refrigeration! What a great living proof of organic crystal lettuce.

With this rare and fateful encounter, I set up my camera, 5D II with 100mm f2.8L macro lens to grab some shots of this tiny snail. With only my macro lens, I was not able to get close enough, so I got my Raynox DCR 250 to add on top of my macro lens and the rest was a wonderful photoshoot with the snail. 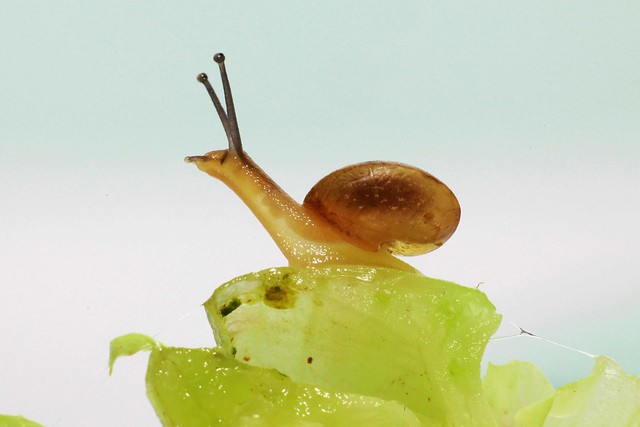 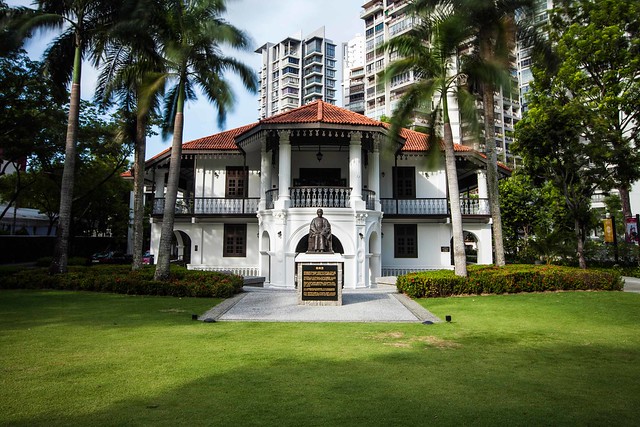 One fine day, I made my way to Sun Yat-sen Nanyang Memorial Hall which is located in Balestier, Singapore. After doing some research in the internet, I got to know that the operating hours are Tuesdays to Sundays, 10am – 5pm and is closed on Mondays, for more information, there is an official website for Sun Yat Sen Nanyang Memorial Hall. Since the memorial hall is so easily accessible, I made it a point to reach there just 30 minutes before the closing time of 5pm, a safe bet for me that there won’t be so many visitors by that time and I was pretty much right about it. It was very interesting to know that Sun Yat Sen Nanyang Memorial Hall is also known as 晚晴园 (Wan Qing Yuan). I almost thought that I was at the wrong place when I saw the signboard in mandarin characters 晚晴园 (Wan Qing Yuan) outside the memorial hall.

I like the picture that I have taken which shows the classical colonial styled villa with the modern skyscrapers at the back giving the contrast of the old and the new in this picture. I took this picture using 16-35mm f2.8L on my 5D II. Putting on the BIG Stopper from LEE filter, I used a long exposure of 25 seconds to capture this image in a RAW format before doing some adjustments and cropping in photoshop. 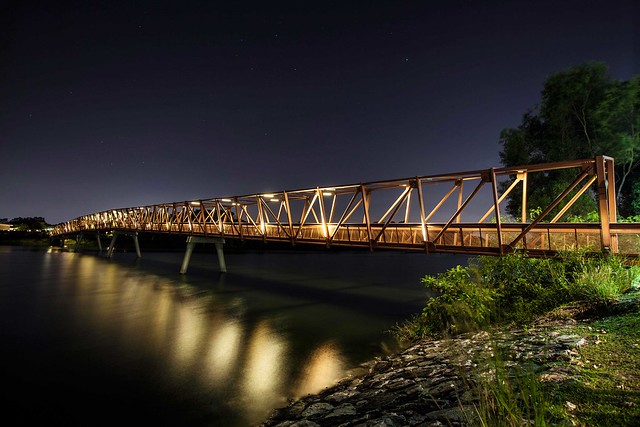 If it’s not for Elaine who told me about this place, I wouldn’t have known the existence of this bridge in my own backyard! When I passed by the entrance to this bridge that lies across the Punggol Serangoon Reservoir, I knew immediately that I have to make a visit back to capture a photo of it. During the day, when I noticed that the sky is clear and blue, my mind was set on preparing my camera setup for a visit to Lorong Halus Bridge as I predicted a nice photo opportunity for a long exposure shot.

When it got dark after the sun set, the lights on the bridge were indeed mesmerizing especially when they reflected off the surface of the water below. I took a moment to enjoy the scenery the first time I strolled across the bridge and I found a spot to rest my tripod to start my long exposure shot.

It took me a few test shots before I found the settings that I wanted and started composing my frame. As I thought that it might be too challenging for me to capture an image of the bridge, I was proven wrong the moment I looked at my LCD screen on camera for my shot taken! I was indeed delighted to have an image beautifully taken with my 16-35mm f2.8L on 5D II using a long shutter speed of 60 seconds. That was a wonderful night.

As the light rain started to clear the sky gradually, I was eager to get to the finishing point to capture shots of the finishers who complete their half marathon gloriously. This women’s run started at Singapore Flyer and ended at the Marina Bay floating platform, also known as The Float @ Marina Bay. The distance women can join were 5KM, 10KM and half marathon. I enjoyed my time taking shots near the finishing point as I can share the joy of the finishers who put in their best effort to finish their half marathon.

I captured these pictures with my 70-200mm f2.8L IS USM on 5D II with AF-ON focusing technique on AI SERVO. 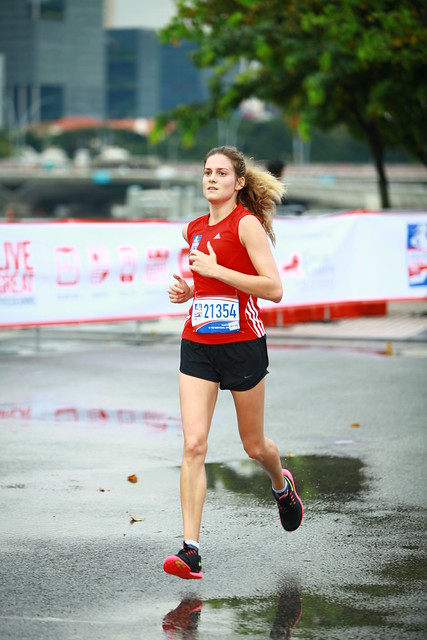 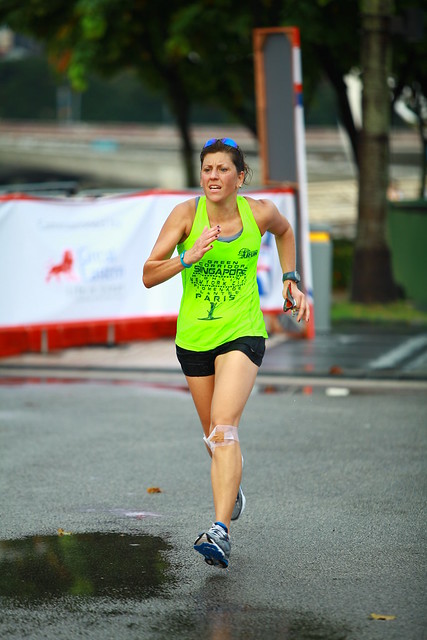 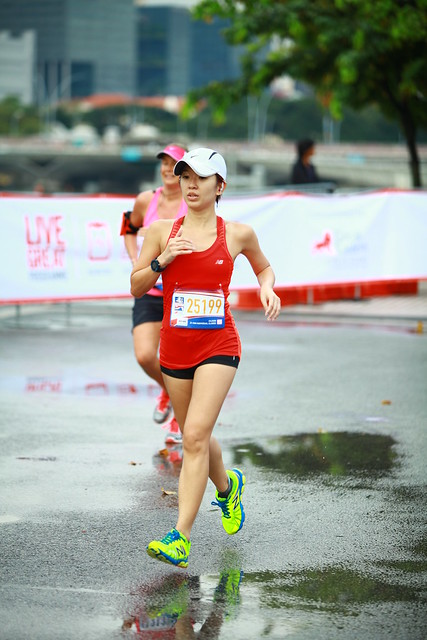 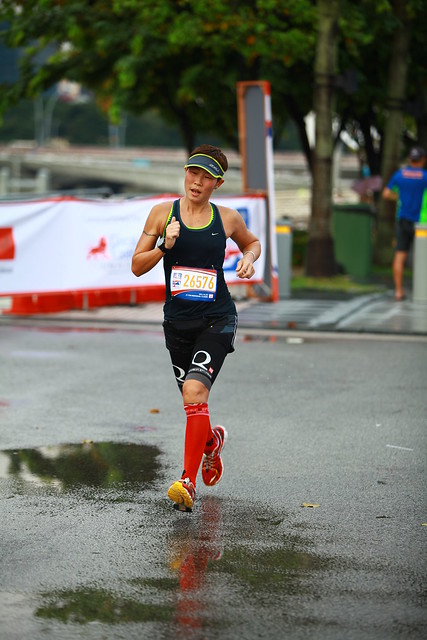 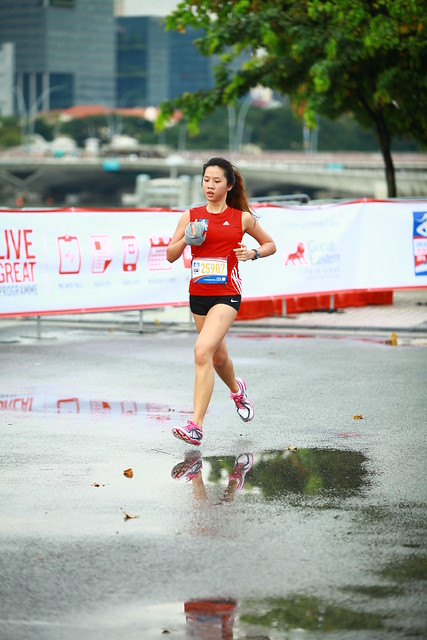 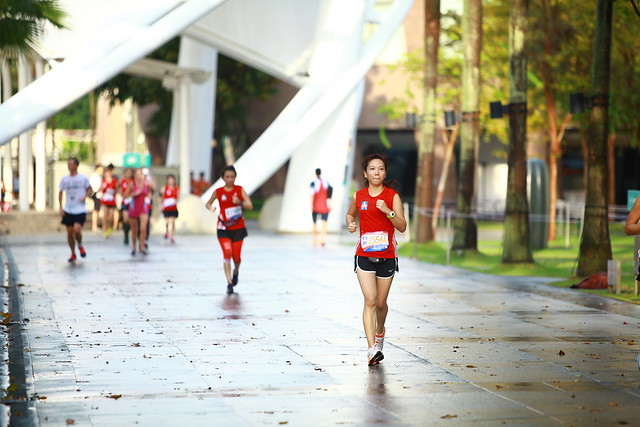 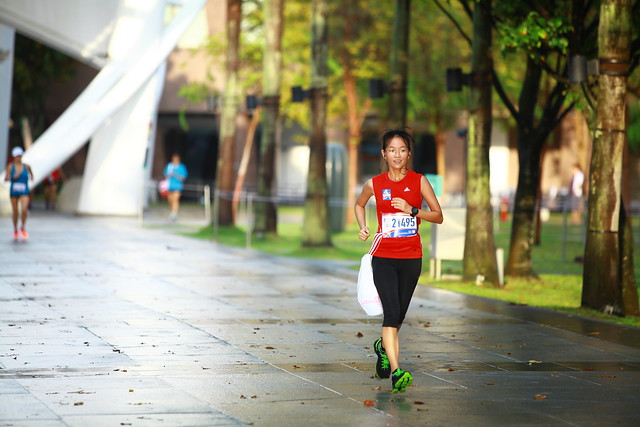 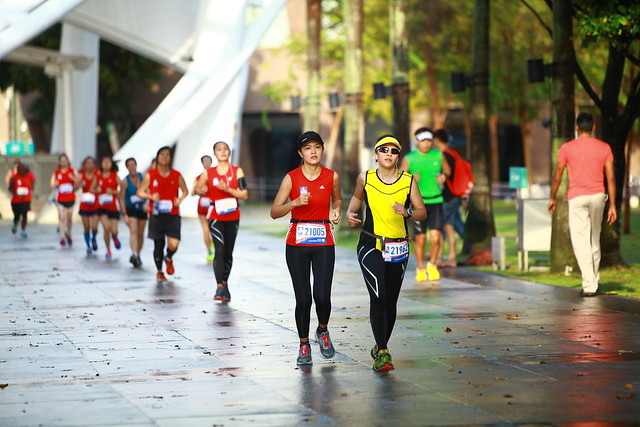 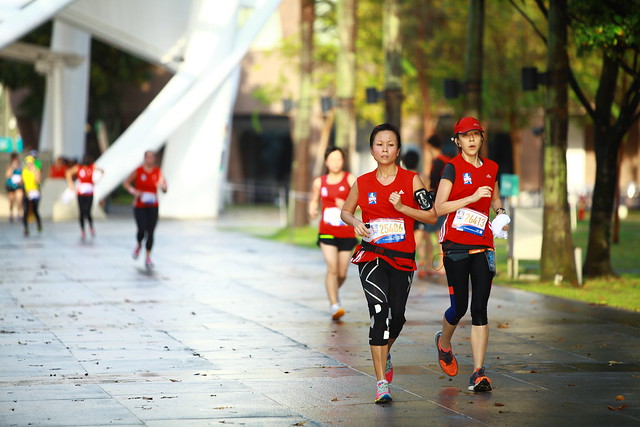 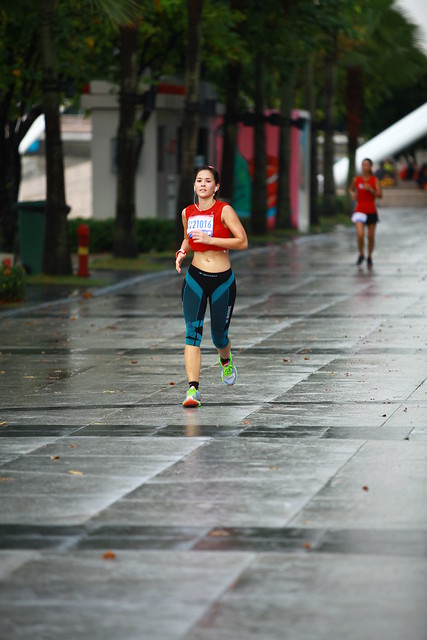 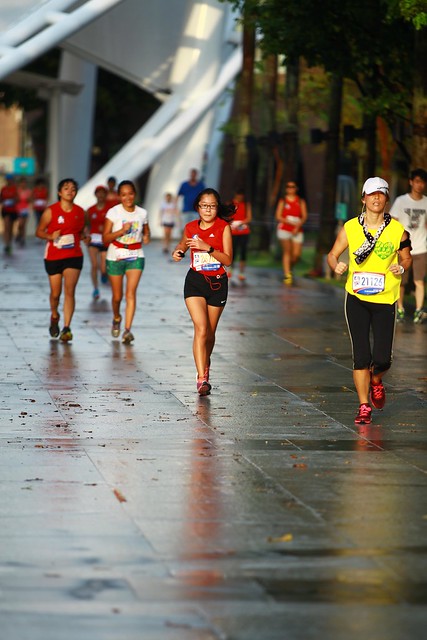 I have always been wanting to capture a shot of the beautifully lighted helix bridge with Marina Bay Sands hotel standing majestically at the end of the bridge. I made sure the time is right and the clouds movement are right as well before composing my shot. I have attempted few other shots with different compositions but all were not as satisfying as this one here. When it was just starting to get darker and at the same time, I wanted to do a long exposure shot, not just 1 or 2 seconds, not even 10 seconds. So I popped on my 0.9ND LEE filter and that did the trick. I manually focused lens on the Marina Bay Sands hotel and started triggering with a wired remote for long exposure.

As I stood facing the landscape of Chinatown from the top floor of a building nearby, I can’t help but to notice the contrast of the low-level and old buildings lying against the magnificent skyscrapers at the background just like how the forest lay back against the mountains. It was definitely a very nice view and I certainly had fun taking shots of different compositions using BIG Stopper from LEE filter mounted on 16-35mm f2.8L II on 5D II.

I later chose this photo as I liked it most while I browsed through the pile of RAW pictures that I have taken. With this RAW file, I separated them into 3 different exposures and then using photomatix to merge them into HDR. So this shot is a HDR long exposure shot of 60 seconds.

Posted by Alex Khoo on October 3, 2013 in Home, Singapore

A very prominent half hexagon shaped building with bright colored window frames used to be our police station back then and was renamed Hill Street Building in 1983. Presently, it is used by Ministry of Information, Communications and the Arts (MICA) with other departments and boards.

With a plan in mind to use BIG Stopper for the shot of this building, I set off to look for a place to position my tripod with vantage point of view. I would also like to frame my shot with somewhere higher or same level with the building. As usual, it took me a while to set up the gear for BIG Stopper as they are made of glass and can be very fragile.

Taken with 16-35mm f2.8L II on 5D II, I took this with f22 and 100 seconds. This was my first attempt to use BIG Stoppers on moving vehicles on the road and I must say that I’m very contented with the results when I captured the moving vehicles as well as the clouds! I have to time my shot as accurately as possible while the traffic lights turned green and vehicles started moving within that 100 seconds of my exposure and also considering the movement of the clouds. This shot was enhanced later in Photoshop for its contrast and minor adjustments on the balancing of the exposure between the building and the sky.

Posted by Alex Khoo on October 1, 2013 in Home, Singapore